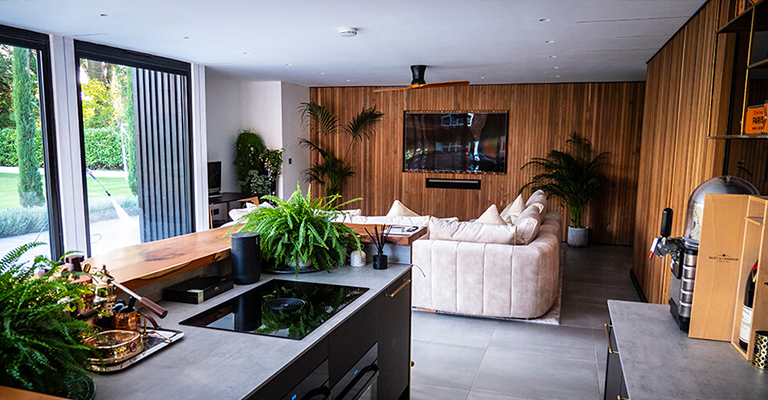 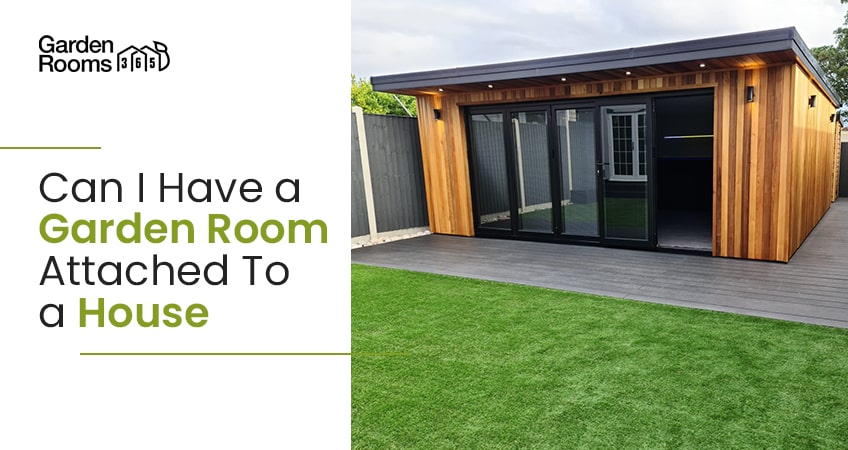 Can I Have a Garden Room Attached To a House?

There are more than a few ways to add living space to your house, with a garden room being one of the most attractive. They boast more than a few uses, especially if you work from home, and can be a cost-effective way to make your home more enjoyable.

Then there’s the difference between a garden room and a typical outbuilding, which is typically seen in how it’s built. Instead of thick timber, these are timber-framed but use plasterboard or similar materials during construction, making them much more affordable.

A lot of effort goes into this, however, and you’ll need to consider quite a few things. One of the most notable is whether or not you can have a garden room attached to your house. Since garden rooms can be placed almost anywhere, provided there’s enough space, attaching it to your house seems like an attractive proposition.

At the same time, it has its drawbacks, with not having a garden room attached to your home also boasting its benefits. It’s worth digging into whether attaching your garden room to your home is actually possible, alongside whether it’s the recommended option.

So, can you have your garden room attached to your home?

While it’s possible to have your garden room attached to your home, it isn’t the best recommended option. Keeping it detached from the property can be better recommended, as it avoids regulations, alongside a host of other complications. If you’re thinking about building a garden room, then it’s likely as an alternative to an extension or conservatory.

That’s primarily because garden rooms boast many of the same benefits as either of these, but don’t need as much of the upfront cost. The construction that goes into a timber frame garden room is quite different to that of extensions and conservatories. It’s much better suited to a standalone building than one attached to an existing one.

As such, though it’s technically possible to have your garden room attached to your home, it’s recommended you keep it detached.

Problems with having a garden room attached to a house

You could feel as though the difference in construction isn’t enough of a reason not to attach your garden room to your house. If it’s still possible, after all, then it could be something you’re still considering. There are more than a few reasons why you shouldn’t take this approach, however.

Attaching a garden room to your house presents quite a few obstacles, each of which will need to be factored into your decision. Since these don’t typically affect detached garden rooms, it makes that option seem more and more attractive.

Finding a garden room builder/supplier to attach it

Many garden room manufacturers don’t like building garden rooms attached to a house. The main reason for this is that it requires quite a few additional skills and extra steps. In some cases, a builder or supplier will refuse to accept the project, making it difficult to find one who will.

Out of those that will, you may end up needing to pay more than you would have if you went with a detached garden room.

Nobody wants to deal with getting planning permission, especially if it’s for a relatively small project. With attached garden rooms, however, it’s something you’ll need to go through, as they could be viewed as home extensions under the law. That adds another step to the process that you mightn’t want to go through.

Coupled with the risks that your application could be denied, avoiding that may be appealing. With a detached garden room, you should be able to do that.

One of the largest benefits of detached garden rooms is that they don’t need planning permission, as long as it meets certain requirements. As it’s considered an outbuilding in these cases, requirements are relatively lax and you shouldn’t need to stick to any local building regulations.

When a garden room is attached to a house, however, it could change how it’s viewed under the law. That could end up meaning that you’ll need to apply for planning permission. Not only is this a delay and extra cost, but it could end up dictating changes to your garden room’s design.

That adds a lot of complexity to the overall process, alongside restrictions on what you can actually do with the garden room. In many cases, you wouldn’t be able to use it as any form of living accommodation, for example.

For the sake of not needing to deal with this, choosing a detached garden room is better recommended.

Garden rooms are typically built using wood or composite cladding on the outside. While that looks great on its own, it mightn’t look as visually appealing when it’s contrasted and adjacent to bricks from a house. The design aesthetics often clash against each other too much, making your home appear worse. You could end up regretting the decision because of this.

Longevity of the garden room

Garden rooms don’t age the same as brick-and-mortar houses and look worse much faster unless continually maintained. When pressed up against your house, this can be visually unappealing, and the garden room may eventually need to be upgraded or replaced to address the issue.

Each of the above reasons could be more than enough to persuade you to keep your garden room detached from your home. Taking this approach provides more than a few benefits on top of this, with detached garden homes being popular for many of these. It’s more than worth considering these before you make your decision.

If you plan on using your garden room for work, then having it detached from work makes it easier to separate your work life from your home life. Since there’s a physical separation between your house and your garden room, you’ll have more of a psychological barrier between work and personal life. Anyone that’s worked from home for a few years can tell you how important that separation can be.

Everyone wants a little more privacy, even in their own home. When you attach your garden room to your house, it feels like it’s simply another room, so it mightn’t feel as private. With a detached option, however, you can make sure it feels more private. That’s especially true if it’s placed as far from the property as possible.

By adding blinds to the windows, you can take this even further. While that means spending a little bit of time getting to and from your garden room, it’s more than worth it for that sense of privacy.

A detached garden room feels like a separate space from the property itself. Alongside the privacy mentioned above, this gives you an extra space to relax and get away when you need to. That feeling mightn’t be as pronounced when the garden room is attached to your home. Sticking with a detached garden room can be recommended for that reason alone.

While this can still turn out well, it’s a limitation many people would rather not have. By keeping it detached from your home, the only real limitation you have is the available space, giving you much more freedom with design choices.

Garden rooms are a cost-effective way to increase your living space while adding a comfortable and visually appealing room to spend time in. You’ll need to consider multiple factors when designing and building it, with whether or not you should attach it to your home being one of the most notable.

Keeping it detached from your house can be the best recommended option for a range of reasons. At Garden Rooms 365, we’re dedicated to providing a high-quality service to each of our customers.

That goes beyond designing and manufacturing garden rooms that you – and we – can be proud of. Instead, we also deliver a service that you can count on, with each of our friendly and trained team members being happy to answer your questions. Give us a call or get in touch today to see how we can help you.

We’re more than happy to organise a free, no obligation quote, so what’s stopping you from getting started on your dream garden room?